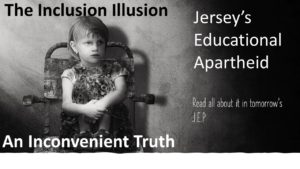 Good Luck to Deputy Vallois, Jersey’s Education Minister, in her pursuit of a better deal for education. She has a mountain to climb. Not only has she had to swim through shark infested waters within her department, a legacy laid down by the previous incumbent, she also has to negotiate a precipitous rock face better known as  ‘progress’.  It stands imposingly adjacent to a hard place, the States ‘Common Strategic Policy’. What are her chances of;

In each case the answer is likely to be zero.

In her recent interview with Lucy Stephenson in the Jersey Evening Post she mentions;

“making sure we are really inclusive.”

In education, inclusion is the principle that all children, irrespective of colour, creed, gender or ability have equal access to mainstream education and the opportunity to work alongside their peers. It is a human right.

Inclusion is not black or white, it is a continuum which should be based on a child’s individual needs. In its simplest form, a child may have access to a mainstream school’s facilities. This could be construed as inclusion although any interaction with mainstream peers would be minimal. Going one step further a child may actually be allowed some access into mainstream lessons. This definitely ticks the inclusion box. To go the whole hog a child would have to be fully integrated into mainstream lessons/life.

The underlying principle that drives inclusion is equality of opportunity. Its purest form is mixed ability. Some baulk at the thought of mixed ability, seeing it as a ‘loony-left’ ideology. Yet the most successful educational systems in the world use that very system, from the Far-East to Finland; although it has to be said that their pedagogies are quite different. Where governments/schools make a fundamental mistake is in assuming that equality of opportunity means the same education for everybody. There are some basics that require equanimity but equality of opportunity should centre around the  individual needs of each and every child. It is not a one-cap fits all situation.

How does Jersey’ Education system stack up in respect of ‘inclusion?  Put bluntly it doesn’t! And this is where Deputy Vallois’ rhetoric comes unstuck. In many Jersey schools. Inclusion is an illusion.

Around 50% of the children on Jersey are educated privately. Of those that are not, we have Hautlieu which selects on the basis of ability. There are also moves to ostracise large numbers of the most challenging pupils from mainstream schools. This is not being inclusive.  Private education, by it’s very nature, is the antithesis of inclusion. It is selective. A cursory look at private schooling statistics on Jersey appears to show that children are segregated using a range of criteria;

It is interesting that Deputy Vallois seeks to address the issue of formula funding. Each state school is allocated  the same amount of money for each child in the school. The States Funded Private Schools receive half of that amount, the difference is more than made up from parental contributions and private investment. If she is looking to level the playing field she will be on a loser. The private school alumini, many of whom make up the island’s political infrastructure, will move to block her. In the States, any suggestion that funding should be cut/reduced for the private schools will be voted down. It would be political suicide for any politician to do otherwise. This is why none of the States members will speak openly against the status quo. It is an inconvenient truth that many islanders, including states members and employees in education, endorse our educational apartheid. To see the disparity one only has to look at the money allocated to the most vulnerable pupils as part of the pupil premium. Compare it with that used to subsidise private education, which is ten times greater for roughly the same number of pupils.

Inclusion and, by default, equality of opportunity, across all of the island’s schools is a pipe-dream. It won’t happen. By the same token, one of the fundaments of the of the State’s Common Strategic Policy, ‘putting children first’ is unachievable unless a fundamental change in philosophy, pedagogy and funding happens.  Senator Vallois states in the interview; “I am legally bound, as Education Minister to educate every child on the island.” It is a grandiose statement that is missing one key word at the end……..equally.