Education and the Fourth Industrial Revolution 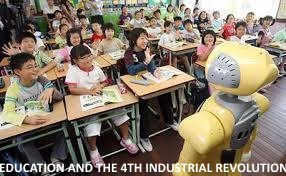 Education and the Fourth Industrial Revolution

There have been three industrial revolutions and we are in the early throes of the fourth. For the record the first three were; steam power to drive mechanisation, electrical power to facilitate mass production and electronics/computing to develop automation. The common feature of all of them is the replacement of labour intensive practices.

The fourth industrial revolution is no different and, arguably, will be even more brutal in respect of causing mass unemployment. The prediction is that up to fifty percent of the present workforce will become surplus to requirements within the next twenty years. This latest ‘revolution’ is a fusion of the digital and the biological, with data recording and analysis as the link! The difference between the fourth and the other three is that rate of change is predicted to be exponential, affecting not just low paid jobs but all aspects of work from agriculture to accounting and from shop assistants to administration. It is estimated that each ‘AI’ will take the place of around ten people.

We already have A.T.Ms and self-service checkouts. Planes mostly fly themselves these days and automation accounts for at least a third of investment banking practice. It is an interesting exercise to speculate which jobs cannot be automated. Stephen Hawking believes that the only jobs left unscathed will be those relating to care, creativity and supervisory (including maintenance). I also believe that specialist construction work will survive. There are already computer programs that negate the use of a teacher. Combine these with distance learning which has been around for more than half a century and you begin to get the picture.

Rather than becoming a thing of the past, zero hours contracts, or at least short term contracts, will be the order of the day. Jobs for life are becoming increasingly scarce, to be replaced by ‘freelance’ expertise that is bought in, much like plumbers and electricians. What is left of the workforce will have to compete for short-term posts.

How will the unemployed survive? There are moves afoot to create a universal basic income (U.B.I) a basic income paid to all families, upon which they will be able to live. This will allow people to choose whether to work or not and it will transform society. It is hard to comprehend for those of us who have been raised with the idea that you must work hard to earn a living and that nothing should come from free. But with mass unemployment looming what is the alternative, a return to Victorian poverty?

What has this to do with education? Everything! I recall when I first came to the island finding it hard to motivate pupils to focus on their exams, the reason being that there was zero unemployment and most could walk into a job in finance. Although the cause was different the effect will be the same.

At present, supposed academic subjects have been given priority, with ‘softer’ subjects such as the Arts and technology increasingly marginalised. Yet in the not too distant future the whole approach will have to be turned on its head as the skills inherent in these subjects become more valued. The emphasis will be on developing basic life skills and the pursuit of leisure as opposed to a career based approach. Traditional crafts like cooking and working with materials (woodwork, textiles etc) may make a return; possibly sports, culture and an increased emphasis on maintaining a clean environment. The teaching profession, assuming that we will still have one, will have to engage, enthuse and inspire if it is to stand any chance of maintaining pupil focus.

As with all the other industrial revolutions, job losses in traditional areas will be replaced by new ones, albeit far fewer. Already we are seeing that education is struggling to meet the growing demand for expertise in the emerging digital economy. Unfortunately, like those who ignore global warming until the waves are lapping at their door, policymakers remain blinkered in their insistence on sticking to old, ‘familiar’ habits. The speed at which education adapts to change is predictably glacial, and not just on Jersey. Rather than being ahead of the market it is forever playing catch up. To ignore the fast changing world that is happening outside education is to build up a whole stack of problems for future generations. From its present narrow focus, education will have to return being both broad and balanced if it is meet the needs of society and the economy of the future.