G.E.R.M or S.T.E.M? The fight for hearts and minds 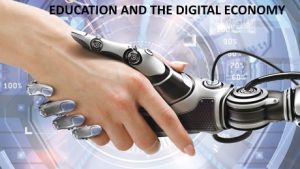 The digital economy is about much more than automation, on-line gambling and computer gaming. The whole fabric of society is changing and its possibilities are endless. Imagine a transport system where everything from traffic lights, vehicle speed and parking is controlled in real time (Bristol, in the UK, is trialling this at present); or how about your vital statistics; your blood pressure, diet and fitness accessed by your GP again in real time? All this can be achieved via data assimilation and subsequent analysis. There will be readers old enough to recall punch card coding machines. The twenty first century equivalent is much faster and a heck of a lot more information is gathered.

It is anticipated that the digital economy could be bigger than that of finance. At present it represents around ten per cent of G.D.P in the UK so if it is to compete the necessary infrastructure will have to be put in place to allow it to blossom. One key component of that infrastructure is education and training.

It is widely recognised that there is a lack of teacher expertise when it comes to computer coding (teacher training uptake for computing is only 68%). Yet binary was part of the curriculum up until the nineteen seventies; advances in science and maths education under Nuffield and Salter’s, also in that decade, were followed by changes in ‘craft’ subjects to more technological subjects such as electronics and systems in the nineteen eighties and nineties via the Technological and Vocational Educational Initiative, in the UK. All this ‘expertise’ has been lost in the last two decades as the pursuit of examination prowess has taken hold.

A brief survey has shown that coding is now being taught in key stages, one, two and three (11-14 years of age). There are also courses in computing being taught at Further Education level.  But, apart from the private schools, the uptake in Key Stage four is patchy. The discrepancy is not just about resources but also about priorities.

Globally, the chase is on to be dominant in the digital market and this has initiated a worldwide battle within education. At stake are the hearts and minds of our children. A global education reform movement (G.E.R.M) has taken hold in countries such as the USA, Australia, the UK….. and Jersey. It is an educational orthodoxy that relies on standardisation of practice. It focuses only on core subjects with examination results as its single benchmark. This political ideology does not meet the demands of a digital economy. As a consequence, a new movement is gaining traction. It is called S.T.E.M (science, technology, engineering and maths). It is the antithesis of G.E.R.M. Yes it is biased towards certain subjects but it is not so much the content that is the issue but rather how it is taught.

There is a place for instruction and a place for learning. By learning I mean pupils actively taking control of their work, through engagement, enterprise and understanding. The G.E.R.M approach utilises learning by rote. It stifles ‘thinking skills’ and is ultimately de-motivating. S.T.E.M is the polar opposite, it even blurs the boundaries between the subjects, working on common ‘problems’ or themes to effect learning.  G.E.R.M is de-skilling both the teaching profession and our future workforce and, as such, is not conducive to the construction of an infrastructure to support and develop the island’s digital economy. Computer coding cannot be taught by rote, pupils have to be given time and space in class to develop the necessary cognitive skills. This is why it is marginalised at key stage stage four where the over-riding priority is to get those five A* to C grades. Only the better resourced schools are able to facilitate both.

Billions of pounds a year has been put into  raising achievement at GCSE level which has only improved marginally. That money could be better invested training  teachers in computer coding. Which do you think gives better value for money? All governments need to look to their future and to have a workforce with the necessary skills to contribute to the economy, providing development for future generations.  G.E.R.M offers very little, S.T.E.M (and the pedagogy it utilises) does much, much more.  G.E.R.M warfare has begun and it is a battle we must win if we are to rescue the hearts and minds of our children and build a sustainable economy fit for the twenty first century.