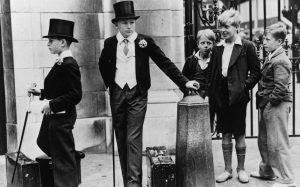 We hear a lot about politicians affecting education but what about education’s influence on politicians? The rite of passage from an independent education through to high office has been a key feature in politics for centuries but the mould seemed to be broken when Clement Atlee’s labour party swept into power in 1945. However, Atlee attended a prep school and was from a distinctly middle class background. Nye Bevan, the architect of the N.H.S and welfare state had his roots in a truly ‘working class’ culture as did Herbert Morrison. Their aim was to improve social mobility for all. The Tripartite education system, created by the Conservative politician Rab Butler in 1944 was the pre-cursor to a post-war demand for equality, offering all those bright enough the opportunity to get an education comparable to that offered by private schools. This was mirrored on Jersey, post-war, with the creation of Hautlieu albeit it took until the 1960’s to achieve this aim.

Whilst most on the right of politics continued to be privately educated those on the left were either schooled in grammars (Harold Wilson, Jim Callaghan, Jeremy Corbyn) or Comprehensives (Ed Milliband, Gordon Brown, Neil Kinnock). Tony Blair the pin-up boy of the centre left was privately educated as was Michael Foot. Champagne Socialists? Margaret Thatcher and Theresa May were both grammar school educated. Most went on to study at Oxford University. In June 2017, for the first time ever, following the UK election, 50% of the UK Government has had a comprehensive education. A sign of the times no doubt but when you factor in that only 7% of children attend private schools, the bias is still significant.

So what of our own states members? At present, the States is comprised of members from a wide range of educational backgrounds. A couple have their origins in boarding school education, some are grammar school taught. Only one has had a truly comprehensive education but if you include Hautlieu that rises to 18% so the mix is not an homogenous one bearing in mind 50% of the schools population are not in fee paying education. This mirrors the UK correlation of having a privileged education and occupying leadership posts.

In Nick Duffell’s seminal book, “Wounded Leaders: British Elitism and the Entitlement Illusion-a psychotherapy” he concludes that politicians that have travelled the ‘gold-plated’ route from boarding school to leadership are not best suited for the role of politician because they lack the emotional intelligence needed to make reasoned judgements. For many, it is not just about their education but is also as a result of absent parents, creating attachments issues that resonate into adult life. Jon Ronson goes one step further, suggesting that 1 in 25 leaders are psychopaths. That means we might have two in our government at present!

Any accountant can balance the books but it takes much more to be an effective leader in today’s fast changing society. Where leadership was once about being the most competitive, nowadays it is also about having the wherewithal to collaborate, inspire and motivate. Why just cut staffing when, with a little more initiative you could involve employees in the modernisation process? Modern leadership is about having the ability to empathise; with a workforce, with a community, with a voting public and a person’s schooling plays a significant role in this respect. Children raised in an inclusive environment tend to be inclusive by inclination. But is the reverse also true?

Grenfell Tower in London stands as a monument to hard-nosed austerity, a ghastly reminder of how fiscal prudence took priority over the health and safety of its residents. Working with people is far more complex than just reading a spreadsheet and meeting targets, it is a skill that requires nurture. Perhaps this lack of empathy is behind voter apathy on the island.

Whilst empathy is not the preserve of those that have had a comprehensive education it would stand to reason that effective governance should have a balance of contributors from all walks of life which, at present, the Island’s government does not. Around 50% come from business and finance; only a quarter are women and there is no representation from ethnic minorities (20% of Jersey’s population). Ethnic diversity is conspicuous by its absence in our independent schools. Around 35% of the present government were taught in single sex establishments. Diversity will only happen when the people promoting it actually comprehend what it involves. If the island is serious about improving diversity in government, and by inference social mobility, it must look at its education system and address the imbalance at source.